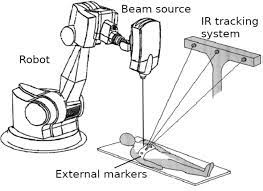 Three-dimensional position of external markers placed on the chest and abdomen of healthy individuals breathing during intervals from 73s to 222s. The markers move because of the respiratory motion, and their position is sampled at approximately 10Hz. Markers are metallic objects used during external beam radiotherapy to track and predict the motion of tumors due to breathing for accurate dose delivery.