Image Matting is the process of accurately estimating the foreground object in images and videos. It is a very important technique in image and video editing applications, particularly in film production for creating visual effects. In case of image segmentation, we segment the image into foreground and background by labeling the pixels. Image segmentation generates a binary image, in which a pixel either belongs to foreground or background. However, Image Matting is different from the image segmentation, wherein some pixels may belong to foreground as well as background, such pixels are called partial or mixed pixels. In order to fully separate the foreground from the background in an image, accurate estimation of the alpha values for partial or mixed pixels is necessary. 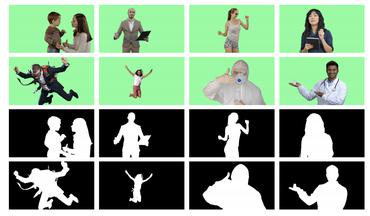 These leaderboards are used to track progress in Image Matting

We evaluate our algorithm on the image matting benchmark, our testing set, and a wide variety of real images.

MODNet is easy to be trained in an end-to-end manner.

With the help of novel masks or scenes, we enhance the current datasets using synthesized shadow images.

We propose a novel approach called Tracking by Deblatting based on the observation that motion blur is directly related to the intra-frame trajectory of an object.

Castle in the Sky: Dynamic Sky Replacement and Harmonization in Videos

This paper proposes a vision-based method for video sky replacement and harmonization, which can automatically generate realistic and dramatic sky backgrounds in videos with controllable styles.

Augmented reality is an emerging technology in many application domains.

SHM is the first algorithm that learns to jointly fit both semantic information and high quality details with deep networks.

We tackle the problem of automatic portrait matting on mobile devices.

Tracking by Deblatting stands for solving an inverse problem of deblurring and image matting for tracking motion-blurred objects.

We propose a novel method that tracks fast moving objects, mainly non-uniform spherical, in full 6 degrees of freedom, estimating simultaneously their 3D motion trajectory, 3D pose and object appearance changes with a time step that is a fraction of the video frame exposure time.