Scene change detection (SCD) refers to the task of localizing changes and identifying change-categories given two scenes. A scene can be either an RGB (+D) image or a 3D reconstruction (point cloud). If the scene is an image, SCD is a form of pixel-level prediction because each pixel in the image is classified according to a category. On the other hand, if the scene is point cloud, SCD is a form of point-level prediction because each point in the cloud is classified according to a category.

Some example benchmarks for this task are VL-CMU-CD, PCD, and CD2014. Recently, more complicated benchmarks such as ChangeSim, HDMap, and Mallscape are released. 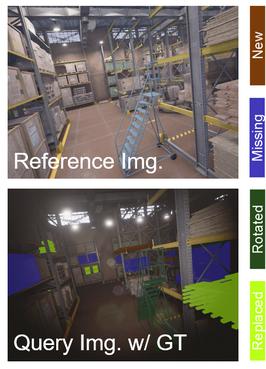 These leaderboards are used to track progress in Scene Change Detection

A critical challenge problem of scene change detection is that noisy changes generated by varying illumination, shadows and camera viewpoint make variances of a scene difficult to define and measure since the noisy changes and semantic ones are entangled.

A straightforward approach for this task is to train a semantic change detection network directly from a large-scale dataset in an end-to-end manner.

In this work, we proposed a CorrFusion module that fuses the highly correlated components in bi-temporal feature embeddings.

SCD is challenging due to noisy changes in illumination, seasonal variations, and perspective differences across a pair of views.