U-Net is an architecture for semantic segmentation. It consists of a contracting path (Up to down) and an expanding path (Down to up). During the contraction, the spatial information is reduced while feature information is increased. The contracting path follows the typical architecture of a convolutional network. It consists of the repeated application of two 3x3 convolutions (unpadded convolutions), each followed by a rectified linear unit (ReLU) and a 2x2 max pooling operation with stride 2 for downsampling. At each downsampling step, we double the number of feature channels. Every step in the expansive path consists of an upsampling of the feature map followed by a 2x2 convolution (“up-convolution”) that halves the number of feature channels, a concatenation with the correspondingly cropped feature map from the contracting path, and two 3x3 convolutions, each followed by a ReLU. The cropping is necessary due to the loss of border pixels in every convolution. At the final layer, a 1x1 convolution is used to map each 64-component feature vector to the desired number of classes. In total the network has 23 convolutional layers. 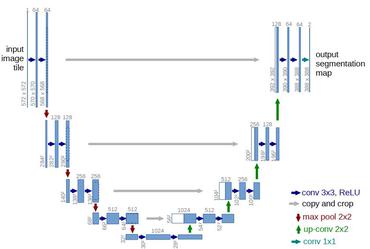 These leaderboards are used to track progress in UNET Segmentation

The method has been evaluated on MRI brain 3D volumetric dataset and CT thoracic scan dataset for spine segmentation.

Deep Learning (DL) has greatly highlighted the potential impact of optimized machine learning in both the scientific and clinical communities.

UCTransNet: Rethinking the Skip Connections in U-Net from a Channel-wise Perspective with Transformer

Specifically, the CTrans module is an alternate of the U-Net skip connections, which consists of a sub-module to conduct the multi-scale Channel Cross fusion with Transformer (named CCT) and a sub-module Channel-wise Cross-Attention (named CCA) to guide the fused multi-scale channel-wise information to effectively connect to the decoder features for eliminating the ambiguity.

Drilling operations are an essential part of furniture from MDF laminated boards required for product assembly.

In this paper, we provide an innovative contribution in the research domain dedicated to crop mapping by exploiting the of Sentinel-2 satellite images time series, with the specific aim to extract information on “where and when” crops are grown.