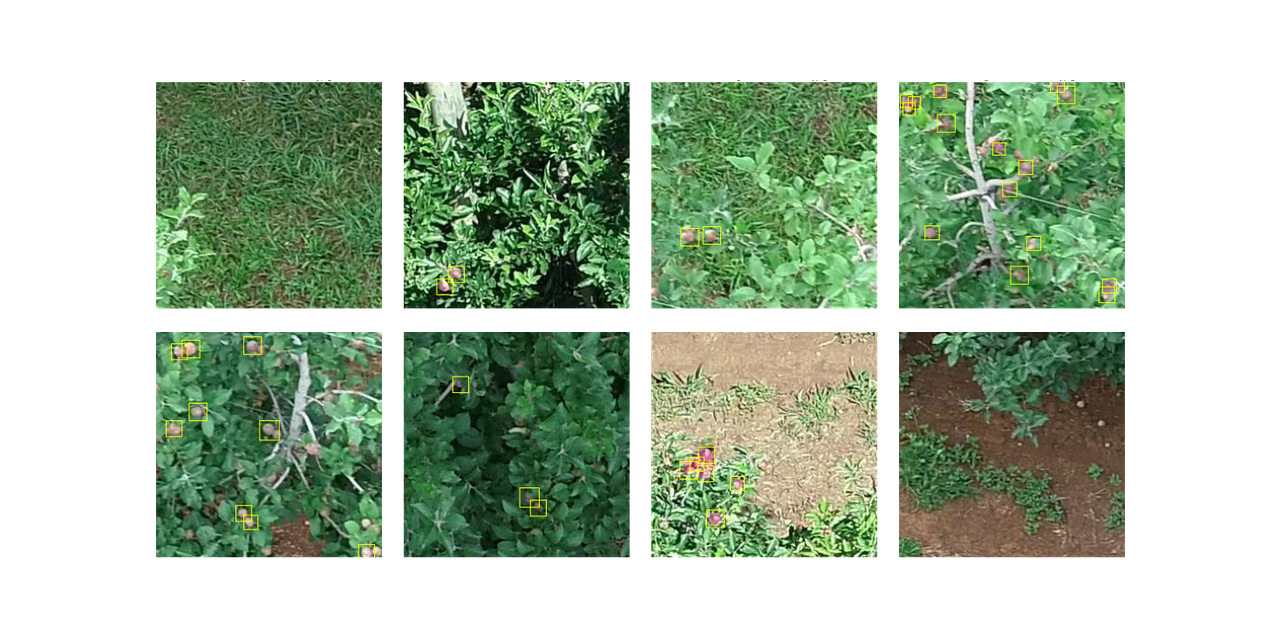 This is a detailed description of the dataset, a data sheet for the dataset as proposed by Gebru et al.

Why was the dataset created?

Embrapa ADD 256 (Apples by Drones Detection Dataset — 256 × 256) was created to provide images and annotation for research on *apple detection in orchards for UAV-based monitoring in apple production.

What (other) tasks could the dataset be used for?

Who funded the creation of the dataset?

What are the instances?

Each instance consists of an RGB image and an annotation describing apples locations as circular markers (i.e., presenting center and radius).

How many instances of each type are there?

What data does each instance consist of?

Each instance contains an 8-bits RGB image. Its corresponding annotation is found in the JSON files: each apple marker is composed by its center (cx, cy) and its radius (in pixels), as seen below:

Dataset.ipynb is a Jupyter Notebook presenting a code example for reading the data as a PyTorch's Dataset (it should be straightforward to adapt the code for other frameworks as Keras/TensorFlow, fastai/PyTorch, Scikit-learn, etc.)

Is everything included or does the data rely on external resources?

Everything is included in the dataset.

Are there recommended data splits or evaluation measures?

The dataset comes with specified train/test splits. The splits are found in lists stored as JSON files.

Standard measures from the information retrieval and computer vision literature should be employed: precision and recall, F1-score and average precision as seen in COCO and Pascal VOC.

What experiments were initially run on this dataset?

The first experiments run on this dataset are described in A methodology for detection and location of fruits in apples orchards from aerial images by Santos & Gebler (2021).

How was the data collected?

The data employed in the development of the methodology came from two plots located at the Embrapa’s Temperate Climate Fruit Growing Experimental Station at Vacaria-RS (28°30’58.2”S, 50°52’52.2”W). Plants of the varieties Fuji and Gala are present in the dataset, in equal proportions. The images were taken during December 13, 2018, by an UAV (DJI Phantom 4 Pro) that flew over the rows of the field at a height of 12 m. The images mix nadir and non-nadir views, allowing a more extensive view of the canopies. A subset from the images was random selected and 256 × 256 pixels patches were extracted.

Who was involved in the data collection process?

How was the data associated with each instance acquired?

The circular markers were annotated using the VGG Image Annotator (VIA).

WARNING: Find non-ripe apples in low-resolution images of orchards is a challenging task even for humans. ADD256 was annotated by a single annotator. So, users of this dataset should consider it a noisy dataset.

No preprocessing was applied.

How is the dataset distributed?

The dataset is available at GitHub.

When will the dataset be released/first distributed?

The dataset was released in October 2021.

What license (if any) is it distributed under?

The data is released under Creative Commons BY-NC 4.0 (Attribution-NonCommercial 4.0 International license). There is a request to cite the corresponding paper if the dataset is used. For commercial use, contact Embrapa Agricultural Informatics business office.

Are there any fees or access/export restrictions?

There are no fees or restrictions. For commercial use, contact Embrapa Agricultural Informatics business office.

Who is supporting/hosting/maintaining the dataset?

The dataset is hosted at Embrapa Agricultural Informatics and all comments or requests can be sent to Thiago T. Santos (maintainer).

Will the dataset be updated?

There is no scheduled updates.

If others want to extend/augment/build on this dataset, is there a mechanism for them to do so?

The maintainers and their institutions are exempt from any liability, judicial or extrajudicial, for any losses or damages arising from the use of the data contained in the image database.