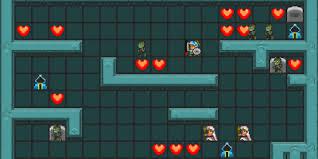 The General Video Game AI (GVGAI) framework is widely used in research which features a corpus of over 100 single-player games and 60 two-player games. These are fairly small games, each focusing on specific mechanics or skills the players should be able to demonstrate, including clones of classic arcade games such as Space Invaders, puzzle games like Sokoban, adventure games like Zelda or game-theory problems such as the Iterative Prisoners Dilemma. All games are real-time and require players to make decisions in only 40ms at every game tick, although not all games explicitly reward or require fast reactions; in fact, some of the best game-playing approaches add up the time in the beginning of the game to run Breadth-First Search in puzzle games in order to find an accurate solution. However, given the large variety of games (many of which are stochastic and difficult to predict accurately), scoring systems and termination conditions, all unknown to the players, highly-adaptive general methods are needed to tackle the diverse challenges proposed.