Survival Analysis is a branch of statistics focused on the study of time-to-event data, usually called survival times. This type of data appears in a wide range of applications such as failure times in mechanical systems, death times of patients in a clinical trial or duration of unemployment in a population. One of the main objectives of Survival Analysis is the estimation of the so-called survival function and the hazard function. If a random variable has density function $f$ and cumulative distribution function $F$, then its survival function $S$ is $1-F$, and its hazard $λ$ is $f/S$. 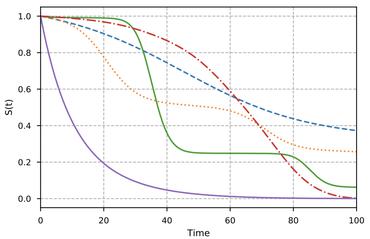 These leaderboards are used to track progress in Survival Analysis
No evaluation results yet. Help compare methods by submitting evaluation metrics.

Survival analysis is a challenging variation of regression modeling because of the presence of censoring, where the outcome measurement is only partially known, due to, for example, loss to follow up.

However, there is usually a gap between the time that a user commits a fraudulent action and the time that the user is suspended by the platform.

We describe a new approach to estimating relative risks in time-to-event prediction problems with censored data in a fully parametric manner.

Survival analysis is a fundamental tool in medical research to identify predictors of adverse events and develop systems for clinical decision support.

An accurate model of patient-specific kidney graft survival distributions can help to improve shared-decision making in the treatment and care of patients.

Tick: a Python library for statistical learning, with a particular emphasis on time-dependent modelling

Tick is a statistical learning library for Python~3, with a particular emphasis on time-dependent models, such as point processes, and tools for generalized linear models and survival analysis.

Survival analysis/time-to-event models are extremely useful as they can help companies predict when a customer will buy a product, churn or default on a loan, and therefore help them improve their ROI.

It is important for predictive models to be able to use survival data, where each patient has a known follow-up time and event/censoring indicator.